My eldest, Parker, moved out the week of my 48th birthday. This picture is of my three kids over a year and a half ago, but it is still a favorite. Now that they may never live under the same roof again in their lives, I'm getting pretty sentimental about the three of them together.

Recently, Parker was in a production of Young Frankenstein at his college. While the humor is really not his (or my) style, the cast did a great job and it was a fun show! I'm glad I got a chance to see it twice because, as with most musicals, there was so much to see. I pay more attention to the ensemble than most audience members, partly because Parker was in the ensemble this time, but also because there is so much fun one misses if they only watch the leads. Parker has some great high laugh lines in the musical and was Count Dracula at the end.
Parker was in a production of Our Town while he was also rehearsing for Young Frankenstein. It is rare for him to have much time between plays and most of the time he is in multiple shows at a time. He still takes a full course load (always getting A's) and works part time in his college scene shop. I really don't know how he juggles it all so well.
One of Josie's favorite sandwiches right now is a Tofu Po'Boy from a highly unlikely local restaurant. They only have a couple vegan options, but the sandwich and the vegan potato salad are great and hard to find in other places in town. Watson's is within walking distance of Rob's work so it makes a great place to meet him for lunch. The tofu is fried so not something to eat often, but it is tasty and a great place to eat with non-vegans. A couple of directors have used this place to feed the cast/crews of films so it is nice for them to have an easy vegan option for my kids. We took my dad there for the first time recents and he ordered a salad with the tofu instead of chicken. I'll have to try that sometime.

I'm not a big romantic. My husband loves romantic gestures in movies, but most of the time they make me cringe. I think it comes from having too many sweet, but obviously non-lasting romances pre-marriage. I was engaged several times before I met Rob and by the time we got together I was over it. I wanted a partnership and something realistic instead of a movie scene. Once in a while, even I get that warm fuzzy feeling from a show that makes me forget all the ugliness in life. I have to admit this scene from Schitt's Creek might go down as one of my top three romantic moments in a show.
If you don't watch Schitt's Creek, you should!
Posted by VeganLinda at 12:35 AM No comments: Links to this post

While we live in a somewhat progressive little college town, I'm always surprised we aren't more vegan-friendly, but sometimes I'm pleasantly surprised. A new bakery opened up close to our home and we finally went by to check it out. We found not one, but two, vegan options in the dessert case! They weren't gluten-free either! Usually, locally we find the twofer vegan/gluten-free option put in as a hasty offering to all those "special dietary needs" customers. I was so happy to have two options that we went back the next day to buy more. 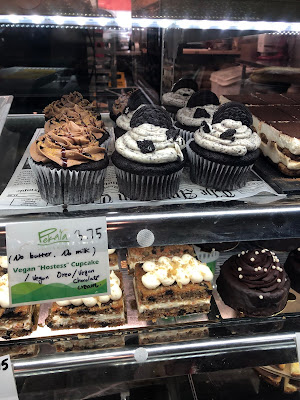 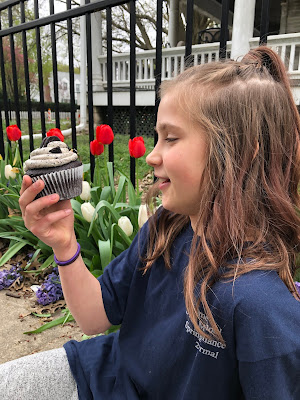 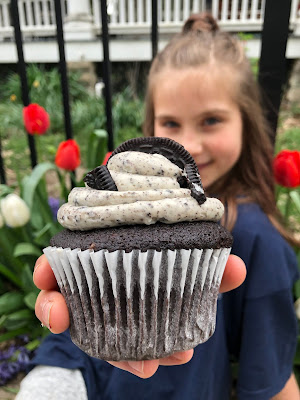 Both types of cupcakes were actually quite good. The frosting was light and fluffy while not being over "buttery" tasting or too sweet. The texture of the cake portion was spot on. We will definitely be back again.
Posted by VeganLinda at 8:06 PM 2 comments: Links to this post

A talented up and coming young director friend of Parker's, Paul Benson, made this fun short. Parker had fun acting in the project. Warning, there is a bit of adult language.

Posted by VeganLinda at 7:57 PM No comments: Links to this post

My middle child, Dema (turned 15 a few days ago), is in a web series about physics for the university in our town. It was so much fun and he learned so much about magnets and physics.

You can see more about it here and here.

I helped out with a short film last November, but I don't think I shared it here yet.
Posted by VeganLinda at 8:33 PM No comments: Links to this post

For the past several years, Parker, my eldest (19) has helped out with The Prompting Theatre and their entry for the annual Easterseals Disability Film Challenge. This is the 2019 entry and the more views they get the better they do. Please watch and enjoy!

Posted by VeganLinda at 8:54 PM No comments: Links to this post

Our friend and one of our favorite local film directors, John Isberg, just released a short film that is somewhat autobiographical for him and the boys helped with a bit. It is touching, sweet, sad, and the boys had a great time working with him. They filmed it a year or so ago, before Dema's voice changed so he feels so young in the film.


The Karaoke Singer from Swede Films on Vimeo.

My newly 19 year old was house/cat-sitting for a neighbor friend for several months so he got used to shopping and cooking for himself. Now he is back living with us and has a much busier school/work/play rehearsal schedule so I do most of the cooking. I get into ruts with my vegetables and this time of year I rely heavily on frozen produce. I usually buy organic and try to find sales since it adds up quickly. We eat a wide variety of vegetables, but I'll go through a brussel sprout faze or okra or put peas in everything...you get the picture. Parker got used to buying these 3 lb bags of frozen mixed vegetables. The bag is resealable so he could maybe get three meals out of one bag. My organic vegetables usually come in 10 oz bags so I use two for one dish. He suggested the other day that I try the larger bags. It does bother me that the vegetables are conventionally grown, but it is super convenient, less packaging, much cheaper, and we get more variety of vegetables in each meal. I'm hoping to freeze more vegetables from our CSA (community supported agriculture) share and the farmer's market this spring/summer so we can use that produce to get us through next winter.
Posted by VeganLinda at 1:30 AM No comments: Links to this post